A patient I recently treated has generously given me permission to share her case history. When this 44 year old woman presented to Clinic, her hair loss was about 40%.

Alopecia Areata is a distressing condition resulting in circular patches of baldness. It can occur at any age, but mostly affects teenagers and young adults.  Six out of ten people affected develop the condition before 20 years of age.  The causes are unclear, but it is thought to be an auto-immune disorder.  It is more common in acquired thyroid disease, vitiligo, diabetes and collagen diseases. Stress is sometimes given as a factor but it may be that the disease is the cause rather than the result of stress.  Traditional Chinese Medicine classically diagnoses this condition as Blood Deficiency.    The treatment was primarily aimed at nourishing Blood and calming the Shen.  The patches of hair loss were treated using a plum blossom needle technique and then needles were inserted obliquely and medially around the periphery of the bald circles. 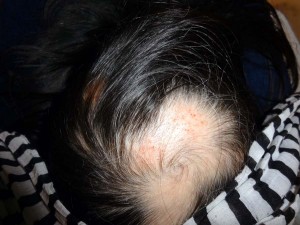 More support can be found at Alopecia UK Online

Regrowth at the side of head

Regrowth at the crown of head